Lesson 1: The rule of five

Decades before the sub-discipline of cognitive psychology was named as such, Ebbinghaus demonstrated some of the essential aspects of memory. One of his most important findings was the ‘rule of five’. For a distinct item to become more or less fixed in memory it needs to be learnt on five occasions (there is a second aspect of this rule, which I will return to later).

This is not to say that something cannot be recalled with less exposure – world champions can memorise the sequence of 10 decks of cards within 20 minutes. Ebbinghous tested his recall of lists of ‘trigrams’, deliberately meaningless three letter combinations of consonant-vowel-consonant. Ebbinghaus found that each time he tested his recollection of a list of trigrams the proportion that he could recall increased at an accelerating rate until it reached 100% after five occasions (figure X).

This was not a futile abstraction; he established a good scientific procedure by isolating what he recognised was an important component of memory: the association of meanings. Clearly, learning by linking ideas is an essential and powerful part of learning (it is at the core of Vygotsky’s ZPD). What Ebbinghaus discovered remains important for teachers, especially those of us dealing with prescriptive curricula.

Whether prescriptive curricula are a good idea is a debate for another occasion. As it is I need to ensure that my students accumulate knowledge and understanding of a range of novel terms within less than nine months. This learning can (and needs to) take place within a meaningful context – the application of these concepts to everyday life, exceptional contexts, and within studies in social science. Even so, Ebbinghaus’s research helps to explain the ‘Chinese learner paradox and shows that abstracted learning has a powerful role to play in education. Regular repetition helps to establish both recall and understanding. Furthermore, regularly identifying and correcting what will be a reducing number of errors, can help our students to master a large number of concepts relatively rapidly.

There is a second pay off in Ebbinghaus’s discovery. The distance between each repeated episode of learning is more effective when it is spaced at increasing intervals. When it comes to some learning tasks it helps to leave an increasing gap between episodes. After the first exposure to the list of trigrams he found that the number of items he could recall would quickly fall off. Typically, he would forget about 50% of the items, though this would fall much further after two days. Each day’s delay caused a further fall, which described a more or less consistent pattern: the forgetting curve. 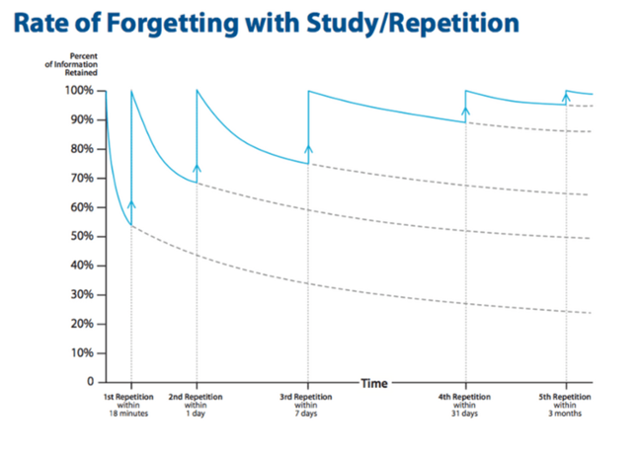 He found a further pattern. When he reviewed and relearned the list the next day after first learning it, the next time he tested himself his recall was much more effective, he could recall 60-70%, even after more than 24 hours. Each time he re-learned the list he remembered a great proportion for a longer period of time. After five occasions he found he could recall the whole list of meaningless trigrams. This spaced repetition forms the basis for an effective learning strategy based on flash cards. A refinement is to sort the cards at the second learning sessions so that the cards that were not recalled are prioritized. Cloze tasks do something which is essentially similar to card sorting, but which raises the level of learning. Cloze tasks provide the chance for repetition in the context of full sentences and paragraphs. I am not going to argue for one or the other – the obvious thing would be to use both.

Spaced repetition – that’s what computers are good at…

This is just the sort of testing and organizing that computers are good at. Flash card exercises can all be done with physical cards and little boxes, cloze could be done with Tipex and a photocopier, but these are time consuming to make and replicate. Computers not only take the hassle out of tracking and sorting, they also take the hassle out of making and storing the cards. The same is true of cloze tasks.

… and this is what Learnclick is good at

A simple word-processing trick makes them easy to make and replicate (I’ll save that gem for another day) but with even less effort Learnclick can be used to generate a web page version; and (for lesson start ‘settlers’ and plenaries) illustrated hard copy versions. Online cloze tasks can also embed web links. I use these to a neat in-class or homework package: the student uses the link, reads the source, then completes the cloze.

At this point the practical advantages of online materials for the teacher become clear. I can just cut-and-paste a source; briskly write my own or (my favourite) give the students a list of key words that must be included plus a word count limit and get them to draft a ‘student friendly’ version – and learn for themselves as they create it. If an existing source selected rather than copied wholesale, and if due credit is given, and you do not charge anyone to use it, you should be safe from copyright issues in most jurisdictions. It would be safest (and polite!) to seek the approval of the publisher. I think it is likely that they will be more than happy, especially if their site uses ad revenue, since you will be steering traffic their way.

For the creation of the Learnclick cloze I had been using drag-and-drop, which is easy to generate. The disadvantage is that if you select more than three or four words the student has a lot of selecting to do, pushing the student into a large ZPD with little scaffolding. Drop down menus reduce the scope, but could add to the teacher’s burden in making distractor items (foils to the correct answer). This is where Learnclick’s new auto-drop down generator comes in. It intelligently selects words from the text.

This is a genius level feature: not only does it make it much quicker, but it also has a pedagogic bonus. The student is constantly reminded of other relevant terms, whilst being forced to deep-level process the meanings of the foil terms too. Of course, if they recognise the correct term straight away, the processing of the foils will not be as deep, but then they will have learned the essential term and move quickly on to the next. If they struggle a little more their learning will be of necessity more profound, and all the more effective for that. It is just as quick as making a cloze with drag-and-drop, but it is pedagogically more sound, and it works better on smaller and touch-screen devices.

I’ll save the topics of ‘learned industriousness’ and ‘deep level processing’ for a future occasion! For now, I’ll sign off with the suggestion that you should try this out. Here are two example on the topic of learned helplessness to try out. One has answers that I created, the second has automatically generated examples.

Generating my own answers allows me to make points (for example put ideas about other this or studies as distractor items to reinforce recall of those topics). Automatically generated answers save time; they also make the task easier (i.e. stronger scaffolding for a new topic or for a struggling student); the distractor items are all from the other questions, which is another reinforce. The importance of this last point relates to ‘deep level processing’ (which does not have to be very deep!)

Note the ‘generate a pdf’ button on the top right (only appears for quiz creators). This is what I use to create paper based versions for classroom use.